Home
Health
What You Should Know About Humoral vs. Cell-Mediated Immunity 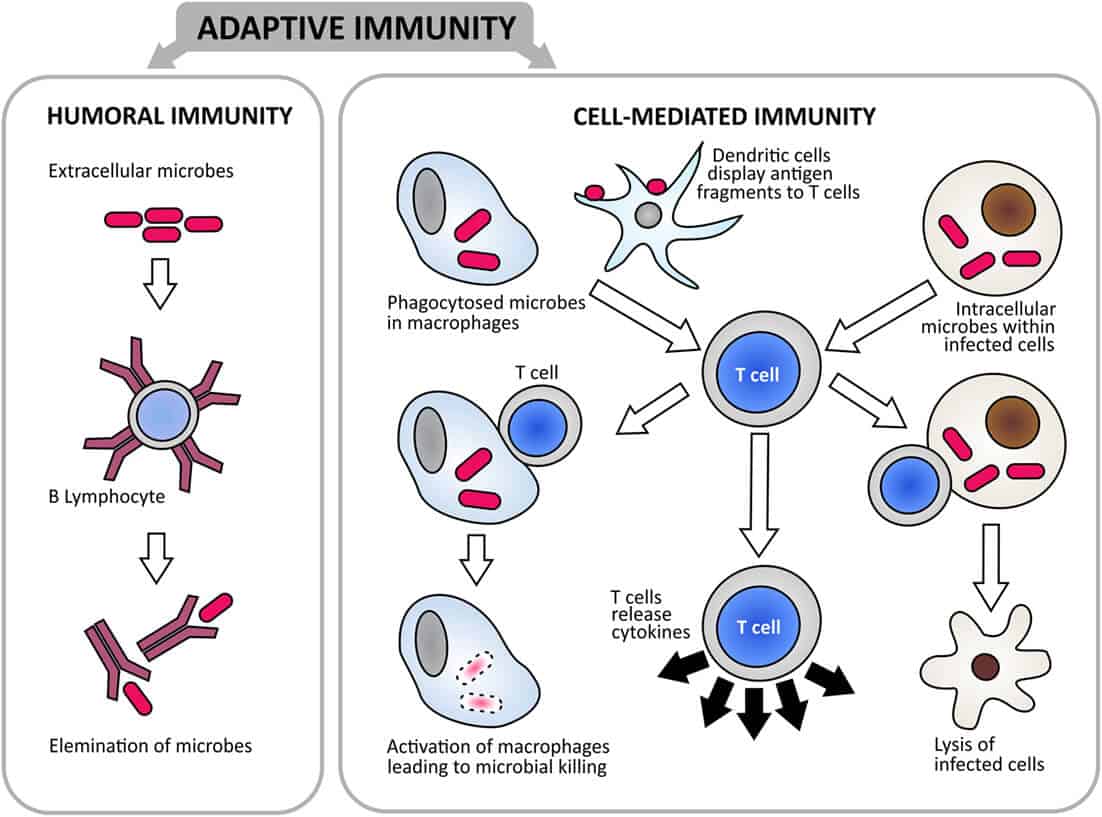 Immunity is the ability of our body to protect itself from pathogens, chemical agents, and from its own sicknesses and cells that are substandard. The biological significance of immunity is to ensure the integrity and permanence of the human body’s composition at the genetic and molecular level during its lifetime.

If we talk in detail about all the components of the immune system, this would require talking not only about proteins, but also about hormones and enzymes. But it would be better to start directly with the mechanisms of action of immune responses.

There are two primary mechanisms through which immune responses occur. This is humoral immunity and cellular immunity. Let’s take a look at each of them in turn.

From the name, it’s observable that humoral immunity is accomplished at the expense of the creation of particular materials, and cellular immunity at the cost of the work of specific cells of an organism.

This mechanism of resistance is shown in creating antibodies to antigens (foreign substances and microbial cells). They recognize various structures in the human body and produce antibodies against specific elements of protein nature, which are also known as immunoglobulins.

The antibodies that are produced are particular. They could only interact with these foreign particles that led to the formation of these antibodies.

Immunoglobulins (IG) are found in the bloodstream (serum), on the surface of immunocompetent cells (surface cells), and in the secretions of the gastrointestinal tract, lacrimal fluid, and breast milk (secretory immunoglobulins).

Besides the fact that antigens are highly specific, they also have other biological features. They have one or more active centers that interact with antigens. More often than not, there are two or more. The bond strength of the vibrant center of an antibody to an antigen is based upon the spatial structure of these materials entering the bond (i.e., antibodies and antigens) and the number of active centers in an immunoglobulin. Several antibodies can bind to a single antigen simultaneously.

Immunoglobulins have their own classification using Latin letters. According to the grading, immunoglobulins are divided into IgG, IgM, IgA, IgD, and IgE. They differ in structure and function. Some antibodies appear immediately after infection, while others appear later.

An antigen-antibody complex activates the complement system (a protein substance), which promotes additional absorption of microbial cells by phagocytes.

Due to antibodies, immunity is shaped after illnesses, and also after vaccination. In viruses, antibodies block the receptors, preventing their absorption by the body cells. Antibodies get involved in opsonization (“microbial wetting”), making antigens easier to consume and digest by macrophages.

Cellular-mediated immunity is immunity mediated by antigen-specific T cells. T-cells are produced in the bone marrow and mature in the thymus. As soon as they enter the blood, the T-cells are found in the bloodstream and lymphatic tissue.

Antigens should be found on the surface of antigen-presenting cells (APC) along with essential Histocompatibility Complexes (MHC). When the T cells float with the antigen, they will increase and differentiate into armed effector cells. T-helper cells excite the B-cells in plasma to form cells.

IgG and IgM are the two fundamental types of antibodies produced by T-helpers in reaction to B-cell plasma. T-cells are differentiated from T cells, but their activity requires activation by a particular antigen. Cellular immunity’s principal characteristic is that it destroys intracellular pathogens.

The Difference Between Humoral And Cellular Immunity

Immunity is a vital process in our body to help maintain its integrity, protecting it from harmful germs and foreign agents. Cellular and humoral immunity are two mechanisms that work together to complement one another and help preserve life and health. These mechanisms are rather complex, but our bodies have very complicated self-organizing systems.

Although the mechanisms of humoral and cellular immunity have distinct characteristics, in terms of their use, they are as effective as possible. Due to the large number of branches and subcategories, it is difficult to enumerate the mechanisms that create these particular forms of protection for human health. But it is easier to understand how each mechanism works.

In practice, both types of immunity are obligatory, since one is impossible without the other. The organism is protected from infection thanks to the created antibodies, but this is possible only at the cellular level of global immunity. This works in tandem with the humoral response, so if one of them does not work, we are left unprotected from disease.

Both cellular and humoral immunity are equally necessary for our health (in practice) and equally “available” in that we can be equally healthy in nature or in a sterile laboratory.